In the Introduction to his famous anthology of poetry and essays titled The New Negro: An Interpretation, Alain Locke compares Harlem’s importance to Black Americans in the 1920s to Prague’s importance in the newly formed Czechoslovakia. That is, both were centers of culture, self-expression, and freedom. Because of the tumultuous political histories of Czechs and Slavs in Europe and African Americans in the United States in the early 20th century, the conclusion of WWI opened new opportunities to each population. In Harlem it was an artistic and literary renaissance for Black artists, and in Prague it was peaceful resistance that resulted in independence. 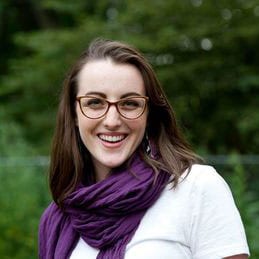 Laura is a sixth year PhD candidate at the University of Iowa where she studies 19th century literature, and teaches literature and writing.

But centuries before Alain Locke compared the oppression of African Americans in the United States to the political oppression of Czechs before their independence, significant African populations existed across Europe because of the European slave trade. (Voluntary migration as with some of the more recent authors on this list also contributed and contributes to African populations in European countries, but for centuries voluntary migration was not the primary or largest form of migration.) While the largest European countries involved in the slave trade were England, Spain, Portugal, France, the Netherlands, and Denmark, other countries such as Ireland, Italy, Germany, Poland, and Russia all had their own histories of African slave trading and mistreating African people that have resulted in large Afro-European populations who still experience discrimination.

Below is a reading list that offers various perspectives on the African Diaspora in Europe due to European and American slave trades. It begins with Congolese-Czech novelist Tomas Zmeskal and includes other first-person accounts from Afro-European and Black American writers who are currently writing about the lasting effects and discrimination of forced migration and slavery in Europe and the United States. The list then looks more broadly at the history of the Diaspora across the Atlantic and how the history of slave trading created our modern world and our modern prejudices. It particularly considers African histories from African perspectives as an attempt to diversify and broaden the European histories we are familiar with. Because Germany had its own unique politics around Afro-Germans during WWII, it has a category of its own. Finally, the list includes, and concludes with, African Americans writing about the African Diaspora and resulting Black experiences in the United States and the United Kingdom. This section also addresses Black Americans relationships to communism in the 20th century, for which they looked to Central and Eastern Europe. Put together, this list is a snapshot of the ways that the forced migration of Africans through centuries of European slave trading created the people and the politics and the prejudices at work all around us.

“The African Diaspora in Europe,” Institute for Cultural Diplomacy. culturaldiplomacy.org

The Biography of the Black and White Lamb Tomas Zmeskal

Black Bolshevik: Autobiography of an Afro-American Communist by Harry Haywood

Paul Robeson: The Artist as Revolutionary by Gerald Horne

I Wonder as I wander: An Autobiographical Journey by Langston Hughes

Destined to Witness: Growing up Black in Nazi Germany by Hans Jürgen Massaquoi

Black on Red: My 44 years inside the Soviet Union by Robert Robinson

Black Man in Red Russia: A Memoir by Homer Smith

Pan Africanism and Communism: The Communist International, Africa and the Diaspora, 1919 –1939 by Hakim Adi

Beyond the Color Line and the Iron Curtain: Reading Encounters Between Black and Red, 1922-1963 by Kate A. Baldwin

Nationalism, Marxism, and African American Literature Between the Wars by Anthony Dawahare

The Black Atlantic: Modernity and Double Consciousness by Paul Gilroy

The Practice of Diaspora: Literature, Translation, and the Rise of Black Internationalism by Brent Hayes Edwards

Encyclopedia of Blacks in European History and Culture by Eric Martone

20 Questions and Answers on Black Europe by Stephen Small

A Breath of Freedom: The Civil Rights Struggle, African American GIs, and Germany by Maria Höhn and Martin Klimke

Not so Plain as Black and White: Afro-German Culture and History, 1890 – 2000 by Theodor Michael

Black Germany: The Making and Unmaking of a Diaspora Community, 1884 – 1960 by Eve Rosenhaft and Robbie John Macvicar Aitken

The World and Africa and Color and Democracy by W. E. B. Du Bois

Radicalism at the Crossroads: African American Women Activists in the Cold War by Dayo F. Gore

Black Revolutionary: William Patterson and the Globalization of the African American Freedom Struggle by Gerald Horne

The New Negro: An Interpretation by Alain Locke

In the Cause of Freedom: Radical Black Internationalism from Harlem to London 1917-1939 by Minkah Makalani

Blacks and Reds: Race and Class in Conflict 1919-1990 by Earl Ofari Hutchinson

The Cry was Unity: Communists and African Americans 1917 – 1936 by Mark Solomon