NCSML President and CEO among inaugural recipients of the award

CEDAR RAPIDS, Iowa – Cecilia Rokusek, President and CEO of the National Czech & Slovak Museum & Library, was among the first recipients of the Woodrow Wilson Award in a ceremony Dec. 12 at the embassy of the Slovak Republic in Washington, D.C. The award, which includes a specially cast bronze medal, was presented to Rokusek and the other inaugural recipients by ambassador of the Slovak Republic to the United States, Ivan Korčok. 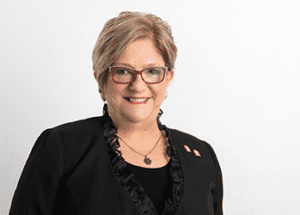 The Woodrow Wilson Award is a collaborative project of the Embassy of the Slovak Republic to the United States and the Embassy of the United States to the Slovak Republic, each making the awards within their respective countries. The awards are given to organizations or persons who have significantly contributed to the development of the Slovak-American relations. On Oct. 10 in Bratislava, the U.S ambassador to Slovakia, Adam Sterling, presented Woodrow Wilson awards to several Slovakian recipients.

The bronze medal presented to Rokusek and the other Woodrow Wilson Award recipients on Dec. 12 depicts the 28th President of the United States, as well as two iconic buildings, the Bratislava Castle and the U.S. Capitol.

“The year 2018 marks two important anniversaries: 100 years since the establishment of Czechoslovakia and 25 years of the existence of the Slovak Republic,” said Ambassador Korčok. “Both of these historic milestones are connected to a strong and friendly relationship between our peoples and countries. The contribution of the Slovak Americans, as well as their American compatriots, including President Woodrow Wilson, to the creation of Czechoslovakia in 1918 will always be remembered and appreciated.”

Korčok added, “The United States played a key role in assisting our young Republic on its way to the trans-Atlantic community after the breakdown of the iron curtain. Slovakia’s transformation and integration process that has brought upon an unprecedented level of freedom, security and prosperity was substantially supported from this side of the Atlantic. Therefore, when we commemorate the anniversary of the creation of the Slovak Republic of 1993, we also recognize the significance of the establishment of strong Slovak-American relations for our national emancipation and success.”

Other recipients of the 2018 Woodrow Wilson Award are: