As a fifth generation Czech American, my exposure to the customs of “the Old Country” had diminished over time. About 20 years ago, I reconnected with my grandmother’s cousin, Melvina Svec, one of the original founders of today’s National Czech & Slovak Museum & Library (NCSML).

Grandma had always baked kolache and rholicky, but volunteering at the NCSML, expanded my appreciation of Czech and Slovak culture and cuisine. I came to learn of the Easter Lamb cake, known as beránek. I learned how to bake it, and in the process, now have a collection of various types of lamb cake molds. Immigrants brought with them their cast iron molds, one of which I acquired through a local antique shop. An original immigrant cast iron mold can be seen at NCSML in the permanent exhibit. My interest in culture and cuisine caused me to research, just where did this custom begin? Even though the history of the lamb cake is vague at best, I share with you my findings and my secrets to a successful lamb cake with today’s ingredients.

Czech Easter breads, cakes, and confections are a big part of this holiday celebration, made with milk, butter, and eggs that were forbidden foods during the Lenten fast leading up to Easter. Many of these are formed into symbolic shapes, like the sweet raisin buns with crosses of bread dough on top; breads made from three braided strands of dough representing the Holy Trinity; and others made from twisted strands of dough representing the rope from which Judas, the betrayer of Christ, hanged himself. Gingerbread cookies are baked in the popular shapes of lambs, bunnies, and birds, often decorated with white or pastel icing. Homemade or purchased, these breads and cookies represent a continuity of traditions from centuries past, including much earlier, pre-Christian times. 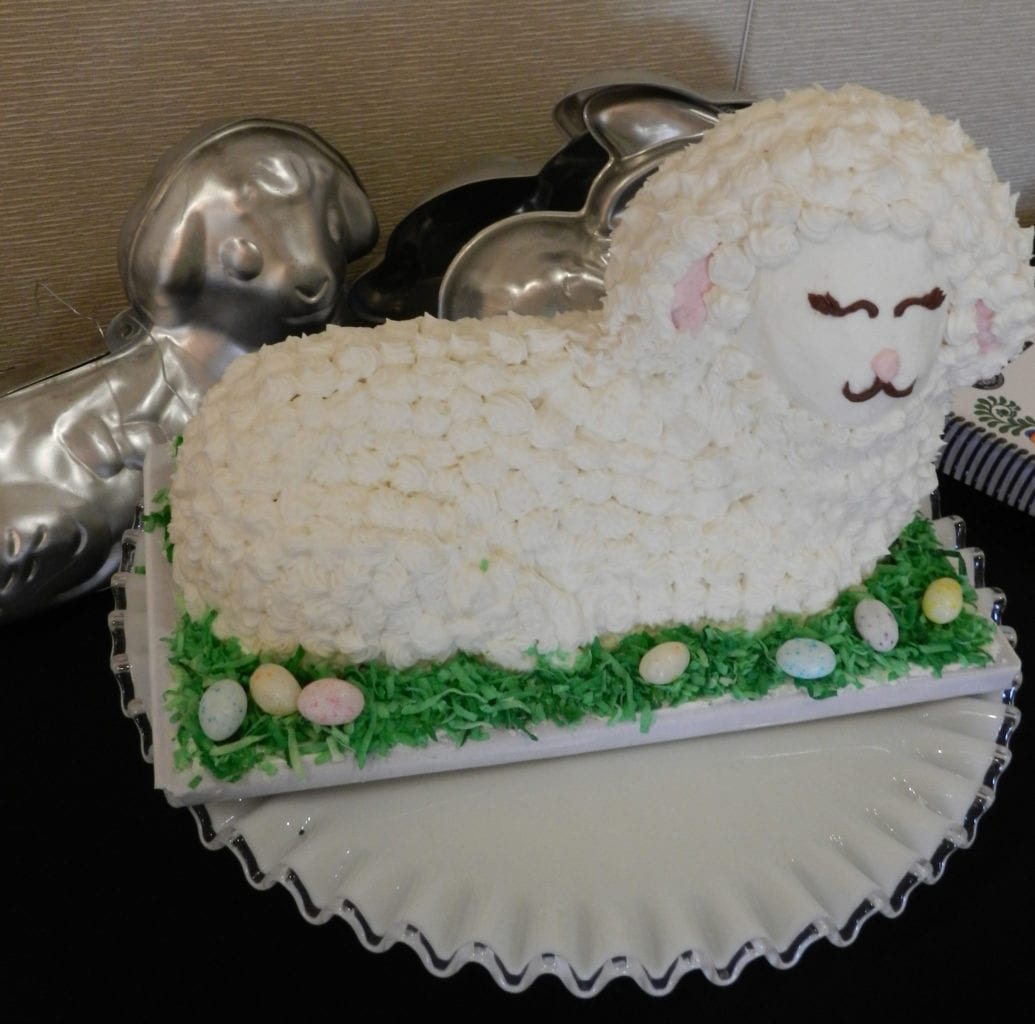 Made from cake batter or sweetened yeast dough, the cakes are baked in three-dimensional metal or pottery molds shaped like lambs. (Fun fact. Orlice is a river in the Czech Republic. Part of the river acts as the international boundary between the Czech Republic and Poland and the molds were produced in this area. These cake molds were also popular in Alsace Northeastern France. There it is called ‘Lamala.’) Today these cakes represent Christ as the sacrificial Lamb of God, but their origin can probably be traced to pagan times, when baked dough effigies of animals were substituted for live animals in sacrificial rites. Some of today’s lamb cakes are dusted with a coating of confectioners’ sugar or drizzled with a light glaze of sugar icing. More elaborate ones are covered with fluffy white frosting, sometimes garnished with shredded almonds or coconut or spread with chocolate icing embellished with white icing swirls. The eyes are made from raisins, whole cloves, or coffee beans, and a small silk ribbon, often with a tiny bell attached, is tied around the lamb’s neck. Some of these lambs also have a branch of fresh rosemary (symbolizing remembrance) in their mouth, and many hold a colored foil banner bearing the emblem of a lamb or a cross, recalling similar banners carried by Christian crusaders to the Holy Land a thousand years ago.

Even before the days of Christianity the symbol of the lamb was widespread in Mediterranean culture, with its long pastoral tradition. For Christian churches, the lamb came to symbolize the Lamb of God – Jesus Christ. In the southern Czech Sumava Mountains there used to be a tradition that blessing a lamb would help wayfarers to find their way through the forests. While lamb is rarely consumed in the Czech Republic today, this does not mean that lamb has disappeared completely from Czech Easter celebrations. It still appears in the form of a cake. The Paschal lamb has meaning for both Judaism and Christianity. It also has an older meaning, as a sacrificial lamb raisin-filled breads (maybe topped with almonds) and cakes shaped like lambs (perhaps coated in chocolate). It is said that the Jewish people of ancient times prepared bread in the shape of a lamb. The beránek, while older, has undergone more changes. The more recent chocolate coated sponge cake varieties would have been unrecognizable to Jewish people thousands of years ago or Czechs of the late Middle Ages. Yet, when one is properly prepared, it has an obvious visual appeal and its symbolism makes it an attractive centerpiece on the Easter table.

The tradition of eating lamb on Easter has its roots in early Passover observances before the birth of Christianity. According to the biblical Exodus story, the people of Egypt suffered a series of terrible plagues, including the death of all firstborn sons. Jews painted their doorposts with sacrificed lamb’s blood so that God would “pass over” their homes while carrying out the punishment. Accustomed to eating roast lamb on Passover, Jews who converted to Christianity continued the tradition at Easter. Additionally, Christians refer to Jesus as the “Lamb of God,” so it makes sense that the food shows up at the Easter table. On a less symbolic note, lamb would have been one of the first fresh meats available after a long winter with no livestock to slaughter.

Eggs have been a symbol of rebirth since ancient times, but it was Mesopotamian Christians who first adopted them as an Easter food. They were also the first to dye eggs, turning them bright red to represent Christ’s blood. Eastern Europeans took egg decorating to an art form, creating delicate wax relief designs in the shells to give to friends and family members. In the United States and Britain, eggs are dyed and used for hunts and rolls. (America’s most famous egg roll, which takes place on the White House lawn, began in 1878 as a pet project of first lady Lucy Hayes.) As egg decorating grew more popular, dishes like deviled eggs and hardboiled eggs became associated with Easter as a way to avoid wasting valuable food.

The custom of giving candy and chocolate for Easter, meanwhile, first appeared in the Victorian age. New technology, developed by the famous Cadbury factory in England, allowed manufacturers to create hollow sculptures made of chocolate, instead of painstakingly applying layer after layer of chocolate to individual molds as they had before. These new processes meant that higher-quality candies were available for a cheaper price, and the market quickly boomed. By 1893, Cadbury alone offered a whopping 19 different product lines for the Easter market! 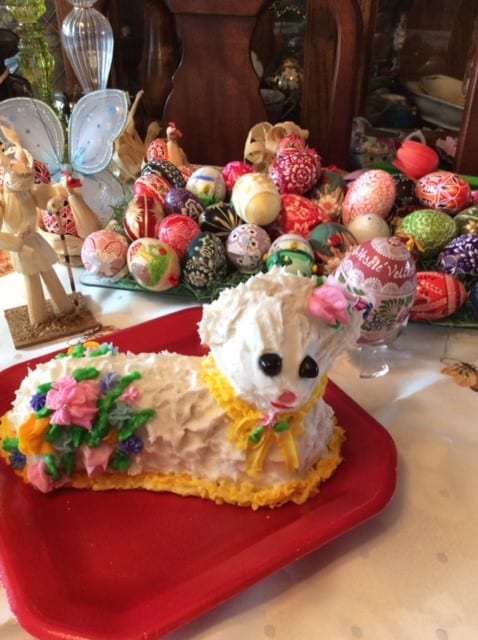 The enduring popularity of both no doubt stems from people’s love of baking and baked goods, especially when made by family. These simple traditions reinforce those family bonds, especially when a recipe has been handed down from generation to generation. Although I do not have any original recipes for lamb cakes, I do have Grandma’s recipes for dumplings, kolache and rholicky. For my cake, I use a pound cake packaged mix, spray my lamb cake mold with Baker’s Joy (No other kind works as well – it is a never fail trick to get the cake to release from the mold.), powdered sugar icing, coconut grass and a ribbon around the neck.

Always remember traditions and the cuisine and customs of our ancestors. It’s never too later to start, simply modify recipes to suit your needs and schedule. Enjoy!