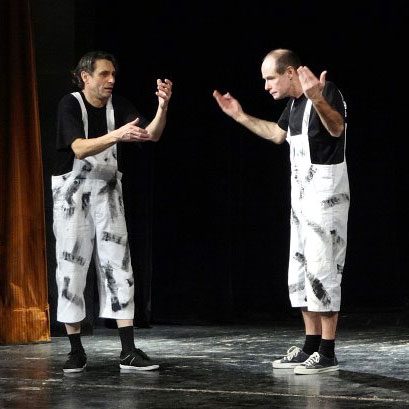 Petr Liška studied at the Academy of Performing Arts in Prague at the Music and Dance Faculty (HAMU). He is a non-verbal performer of children’s theater and the founder of MIMos or Divadlo Dĕtem pro Radost (Theater for Children’s Happiness), a Czech theater association, which brings into fruition its own children’s theatrical performances. Founded in 2007, its mission is to support culture and art dedicated to children, primarily focused on nonverbal and motion performance. More information may be found at the following webpages: nabídkapohadek.cz.

Michal Hecht studied pantomime at JAMU Brno and acrobatics via a private course of Eva Bosakova, as well as non-verbal theater. He has played his own solo performances, taught, and directed non-verbal performances as well as spoken performances. He often works in television, participating in a number of TV shows and entertaining programs as a scriptwriter. He prepared a slapstick series for children in Finnish TV called “Miki and Ivi”, and a short film “Through the eyes of a mime”. On Czech TV, he participated in making the famous programs for children “Ju and Hele”, as well as in many Dada Patrasova’s acclaimed programs for children. Please read more at www.mimchal.cz.