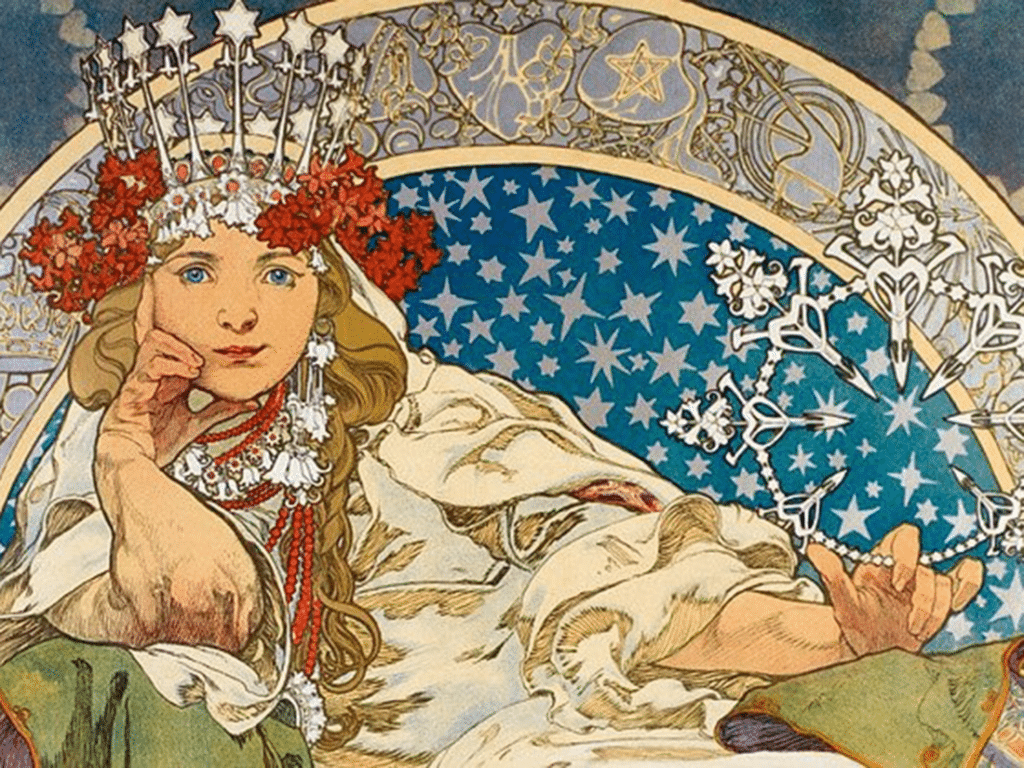 Paintings, lithographs, sketches, photographs and sculptures, directly from the Mucha Foundation in Prague and London, was the first exhibit in the Jiruska Gallery after the National Czech & Slovak Museum & Library’s grand opening. Not since 1999 had an exhibit of this size and caliber appeared in the United States and it was the first of its type to appear in the Midwest region.

This opportunity to view the lush beauty of Mucha’s flowing elegant work, recognized by people all over the world, was a once-in-a-lifetime chance for many. Alphonse Mucha: Inspirations of Art Nouveau was divided into six sections and explored Mucha not just as the father of Art Nouveau, but also Mucha’s Moravian roots, his family, his photography and his devotion to the Slav people. The exhibit ENDED December 31, 2012.

Alphonse Mucha (1860-1939) is best known for his illustrations and poster art used as advertisements for shows in Paris. In fact, Mucha’s move to Paris in his late twenties transformed his entire career. In Paris, he created magazine and advertising illustrations, living a modest life until he designed a lithographed poster for a play featuring the most famous actress in Paris at the time, Sarah Bernhardt. The poster attracted attention—even Bernhardt took notice and placed him on contract for six years.

More than a painter, Mucha also created deigns for jewelry, carpets and wallpaper. What was deemed the “Mucha Style” soon turned into something greater—“Art Nouveau.” Many of Mucha’s works depict young females in flowing dresses and robes, surrounded by jewels and lush flowers. Mucha used paler pastel colors with expertly used pops of color.

Ronald F. Lipp describes the females in Mucha’s work—the Mucha Woman: “She beckons us hypnotically with some inexpressible yet compelling vision, some unspoken promise—wholesome, alluring, uplifting and erotically vulnerable. Her gaze is half-focused, as if she is herself emerging, posed at the moment of awakening, suspended between her loving viewer and some faintly remembered image of another world. Her allure is often heightened by her tresses which spill luxuriantly, perhaps windblown or disheveled, forming a halo surrounding her face.”

Though he attained fame during his lifetime, Mucha became frustrated with the public’s demand for commercial art. Although he produced everything from graphic art for menus to advertisements for Nestlé, he wanted to produce art of his own accord instead of something commissioned.

In Sarah Mucha’s book, Alphonse Mucha: Celebrating the Creation of the Mucha Museum, Prague, Petr Wittlich, Professor of Art History at Charles University, Prague, described Mucha’s journey: “From the time of his youthful enthusiasm, throughout the period of his fame in Paris and ultimately to his realization of how an understanding of history can shape the destiny of a nation, Alphonse Mucha’s lasting concern remains the necessity of combining beauty and goodness.”