In the summer of 1942, 22-year-old Franci Rabinek, designated a Jew by the Nazi racial laws, arrived at Terezin, a concentration camp and ghetto 40 miles north of her home in Prague. It would be the beginning of her three-year journey from Terezin to the Czech family camp in Auschwitz-Birkenau, to the slave labor camps in Hamburg, and Bergen-Belsen.

She finally returned to Prague after liberation by the British in April 1945.

Franci was a dress designer who lied to Dr. Mengele at an Auschwitz selection, saying she was an electrician, an occupation that both endangered and saved her life. In her memoir, Franci’s War: A Woman’s Story of Survival, she offers an intense account of those dark years.

Franci Rabinek Epstein died from a brain aneurysm in 1989. It was her daughter, journalist Helen Epstein, who brought her story to life. Sections of Franci’s unpublished manuscript appeared in her daughter’s 1997 family memoir, Where She Came From: A Daughter’s Search for Her Mother’s History. 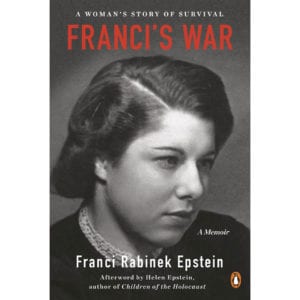 More than 20 years would pass before Epstein would revisit her mother’s words. In March of 2020, Franci’s story was published to great reviews, including this statement from former Secretary of State Madeline K. Albright: “By bringing her mother’s vivid and engrossing memoir into the public eye, Helen Epstein has made another important contribution to our knowledge of the Holocaust in Czechoslovakia. Franci’s War is full of passion, heartache and love – shedding light on humanity’s darkest era and providing added testimony to the incredible human capacity for resilience.”

The National Czech & Slovak Museum & Library is honored to host a virtual book talk with Helen Epstein from 7 to 8 p.m. on Thursday, March 18. This program is free to attend, but registration is required. To register, visit https://ncsml.org/event/francis-war-virtual-author-talk or call the NCSML at (319) 362-8500.

This presentation is being offered as part of NCSML’s Stitching History from the Holocaust textile exhibit. Curated by Jewish Museum Milwaukee, the exhibit tells the story of Hedy and Paul Strnad through Hedy’s dress designs, memorializing the talent that was lost during the Holocaust. Stitching History is on display in the Smith Gallery through Match 21.

Copies of Franci’s War: A Woman’s Story of Survival are available for purchase in the award-winning Museum Store. All proceeds fund NCSML operations and future programs.